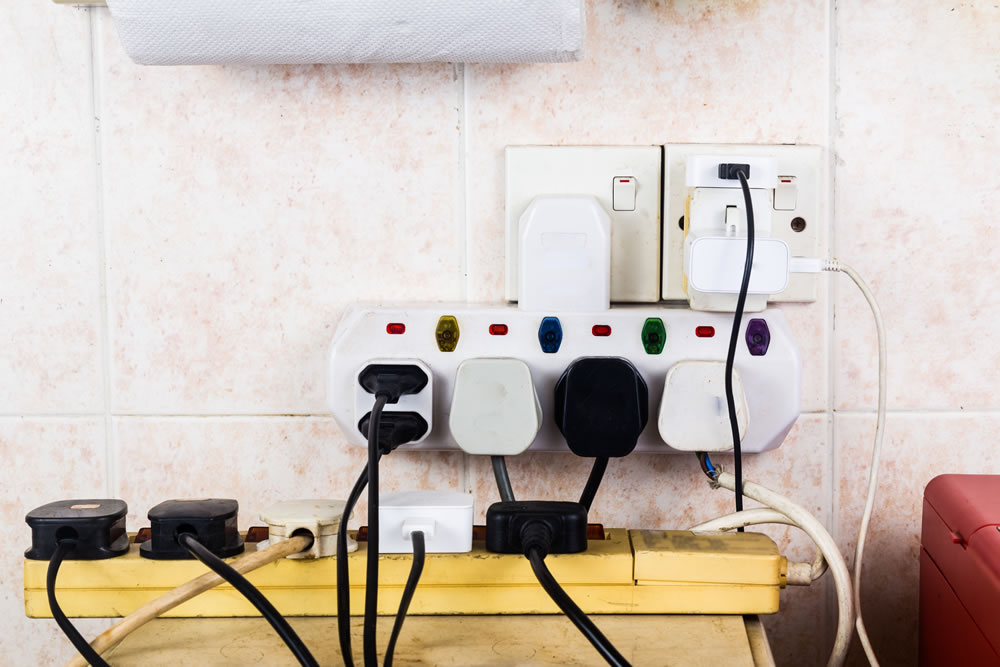 Electricity is not something to be taken lightly. Most people recognize this and leave any wiring concerns to professionals. However, there are still some common bad habits that can lead to electrical fires, shocks, and other potentially serious hazards.

In fact, the US Consumer Product Safety Commission estimates that every year there are approximately 31,000 home electrical fires. In some of these cases, the incident also includes electrocution or electricity-related harm. In many of these instances, the problem could have been avoided by adopting improved electrical safety tips.

What Are Some Of The More Common Causes Of Home Electrical Fires?

The National Fire Protection Association estimates that damaged, faulty wiring or compromised electrical equipment is a primary cause of roughly 69% of home fires in the United States.

Fortunately, most electrical fires can be prevented by adopting some of the following basic electricity safety tips.

Electrical Safety Tip One: Double Check That All Your Fixtures And Appliances Use The Correct Wattage

Many light fixtures are rated for a specific maximum wattage, though there are some that do not. If you exceed the maximum wattage of a fixture our outlet it can significantly increase the chances for an electrical fire.

Fortunately, many new energy-efficient lightbulbs have a lower wattage draw than old incandescent lightbulbs. In some of these cases, you might want to also want to upgrade some of your older fixtures. You want to make sure that any outlets you plug an appliance into are up to code, or you should have them replaced.

Outlets in the bathroom also need to have a GFCI. Also known as a ground fault circuit interrupter, this special type of outlet has a reset switch built into that works very much like a fuse.

Just like fixtures, the standard 110 Volt outlets in your home have a limited capacity. While power strips and outlet converters might be tempting to use, they can potentially overload the outlet or the associated wiring in the walls. This is one of the more common causes of electrical house fires.

If you notice an outlet or a power cord feeling hot, you should unplug it as soon as possible. The outlet and all the related circuits should then be tested and inspected by a professional electrician.

Tip Three: Have All Damaged Cords Professional Replaced Or Disposed

A damaged power cord or an extension cord with a damaged ground can quickly become a serious fire hazard. If you notice a wire or power cord that’s been damaged, you should either dispose of it or have it repaired by a professional electrician.

If you find yourself frequently using extension cords or power strips, it could be a sign that your home or a particular room has too few outlets. Rather than risk overloading an existing, older outlet, you should consider having a professional install additional outlets.

Tip Four: Properly Maintain And Store Extension Cords When Not In Use

Extension cords that are stored away in a haphazard manner are increasingly prone to damage. This could come in the form of bent prongs, torn insulative coating, or a compromised ground. Being careful with how you store your extension cords, reduces your chances of an unexpected incident.

If an extension cord or other power cord that feels hot needs to be unplugged and inspected. It might be the case that the cord has been compromised in an unforeseen way, or it’s not a thick enough gauge for the current draw of the appliance.

Tip Five: Unplug All Appliance When Not In Use

It’s a good idea to unplug unused appliances. Some appliances draw a small amount of current even when they aren’t in use. This could lead to hot power cords, or the appliance accidentally being turned on. Something as simple as a toaster oven on a counter could accidentally turn into a serious fire hazard.

If you sometimes struggle to remember to unplug unused appliances, you might want to have smart plugs installed in each room. This type of plug can be linked to your smartphone, allowing you to control it remotely through a simple app.

Tip Six: Keep Electrical Equipment And Devices Away From Water

Water in kitchens, bathrooms, and laundry rooms poses a serious threat to electrical appliances. Something as simple as a curling iron or hairdryer that is left plugged in near a bathtub can quickly turn into a very serious electrocution hazard.

Upgrading all the outlets in these rooms to state of the art GCFI power outlets will reduce electrocution risk. Even something as innocuous as a full aquarium could pose a risk to nearby electric devices.

Tip Seven: Make Sure That All Appliances Have Sufficient Air Space

Many appliances like refrigerators, freezers, and electric ranges produce heat while they operate. Making sure that they have the proper air circulation they need to prevent overheating.

As an added protection, you should avoid placing dry or flammable objects near heat-producing appliances. This includes the oven/range, and electric dryer.

Tip Eight: Make Sure That All Your Vents And Exhaust Fans Are Clear And In Good Working Order

Vents and exhaust fans are meant to move hot air, steam, and airborne debris away from critical locations. If they become clogged, or the fan motor is compromised it can lead to a wide range of fire hazards. Even something as simple as making sure to thoroughly clean your dryer’s lint trap can prevent a serious fire.

In some cases, the surrounding vents might be clogged and need cleaning. If a fan has been compromised, you will likely need to have it professionally replaced. The longer the problem goes unaddressed, the more likely it is to become a fire hazard.

Children are innately curious about the world around them. They love to poke and prod things, including electric outlets. This puts them at increased risk of shock and electrocution. Fortunately, child safety companies offer a wide range of outlet protectors and other devices to keep little ones safe in the home.

Tip Ten: Be Safe During Storms

Most homes have advanced grounding systems that prevent direct damage from lightning and power surges. However, flooding, roof leaks, damaged gutters, and severe weather can introduce water into your home. If you notice water in your basement or some other room of your home, it’s a good idea to unplug everything in the room. If possible, you might want to also disengage the related breaker or fuse.

For additional information or to have a site survey, please contact us via this form, or call Brase Electrical Contracting Corporation at 402-331-0400.