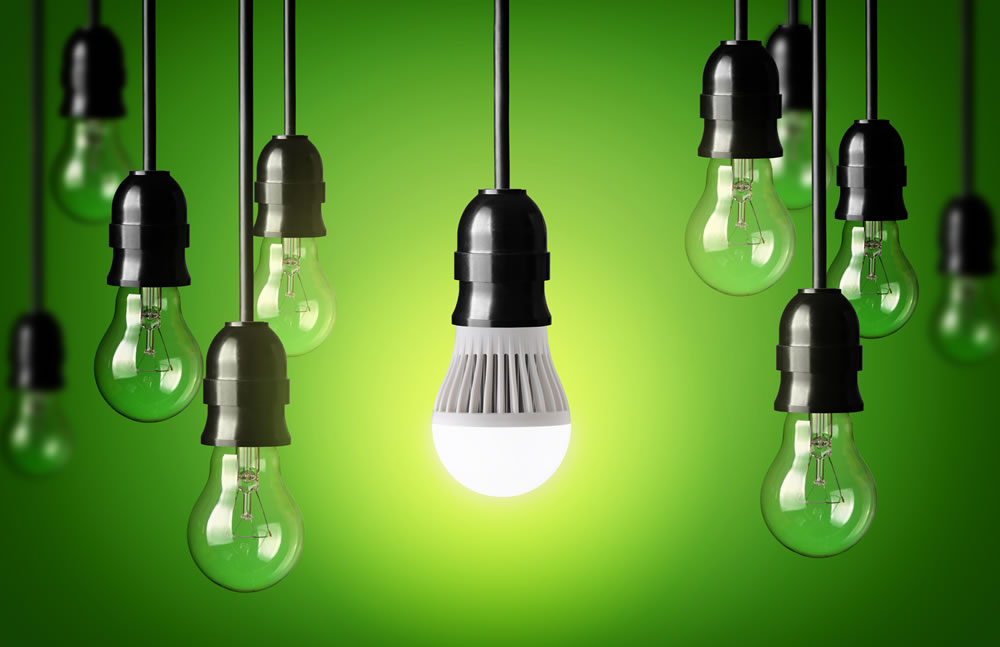 Energy efficiency has become an increasingly popular topic. It has a lot of traction with people who are concerned about the environment and things like carbon footprint. It also matters a great deal to anyone who has to shoulder the cost of a monthly electric bill.

What Are LED light bulbs?

The acronym LED stands for “Light-Emitting Diode.” Today the technology has been refined to the point where LED bulbs are rated to be 90% more efficient than incandescent light bulbs.

When you activate one, an electric current passes through a special type of microchip. It then emanates a small amount of light in the visible light spectrum. At the same time, and tiny heat sink in the bulb absorbs any heat energy produced.

This configuration means that LED bulbs don’t “Burn Out” like compact fluorescent or incandescent light bulbs. As time goes on an LED element starts to develop something called “Lumen Depreciation.” This process gradually causes the LED light to produce less and less light, which can make it hard to define its overall lifespan.

How Are LED light bulbs Used?

In general, LED lights are smaller. This allows them to be used in some relatively versatile and unique ways. Some LED bulbs are designed to look very similar to traditional incandescent light bulbs, while others are built into unique lighting fixtures and technological devices.

Regardless of design and esthetics LED bulbs and devices produce “Directional Light. This essentially means they emit light in a specific direction. Compact fluorescent and incandescent light bulbs tend to emit light in every direction as well as producing significantly more heat.

This directional light has many advantages and potential drawback. When it comes to lighting a larger area, LED engineers need to develop light bulbs that produce light in every potential direction. While this might have been a challenge in the earliest days of LED technology, it has now a non-factor when it comes to standard LED lighting fixtures.

Do LED light bulbs Get Hot?

The heat caused by resistance and other micro-environmental factors is the primary enemy of many electronic devices. By design LED light bulbs have a built-in heat sink. This essentially takes any heat energy produced by the light-emitting diode and dissipates it into the surrounding air. This essentially prevents the diode from “Burning Out” like the filament in a classical incandescent lightbulb.

There are several different forms of heat management that might be built into an LED lighted device or bulb. In general, the more heat the device generates the shorter it’s lifespan will be.

In recent years LED technology has evolved, allowing designers to employ a variety of ways to reduce the heat effect of a bulb or device. Today nearly all LED products carry the ENERGY STAR insignia which means that they’ve been tested to meet energy efficiency standards for heat management as well as light output.

How Does an LED Light bulb Compare to A Compact Fluorescent Lightbulb?

Compact Fluorescent light bulbs, which are also known as CFLs work on a different set of principles. With these light bulbs, an electric current essentially flows between two electrodes at each end of a tube that has been filled with a special type of gas. The photoelectric reaction caused by exciting the atoms of gas then generates ultraviolet as well as a small amount of heat. A special phosphor coating on the inside of the lightbulb essentially transforms the UV into visible light.

This is essentially a more evolved version of the old fashioned fluorescent light bulbs that you have likely found in the past in commercial properties and educational institutions. Those older bulbs tended to buzz and flicker, while they were more energy efficient than incandescent bulbs, the traditional fluorescent light bulbs were not as energy efficient as modern-day CFLs. Yet even today’s compact fluorescent bulbs still consume more energy than LEDs.

Are LEDs Available in Different Colors?

LED light bulbs that are meant to light a general space typically produce white or soft white light. This usually involves covering the surface of the bulb in a special type of phosphor material. This lightly yellow-hued material very closely mimics the soft white light produced by traditional incandescent and fluorescent bulbs.

However, the nature of LED technology is far more versatile than other types of bulb. Bulbs and elements built into devices can be modified to produce other colors including:

How Much More Energy Efficient Are LED light bulbs?

There are several factors that go into the energy and cost efficiency of LED light bulbs. Quality LED bulbs tend to last much longer than incandescent bulbs and significantly longer than fluorescent light bulbs. This means you have to replace them less often, which is a major cost savings in and of itself.

In the United States, residential-use LEDs, which are typically ENERGY STAR rated use at least 75% less energy than a traditional incandescent light bulb. They also tend to last around 25 times longer. This significantly reduces the overall long-term energy consumption which is of course reflected in your energy bill.

In industrial and commercial settings, the energy efficiency and directional nature of LED light bulbs can yield significant savings. Today LEDs are becoming increasingly popular in street lights as well as in parking garage lighting systems. LEDs are also found more often on public, commercial and private walkways, as well as other types of outdoor area lighting.

How Much Do LED Replacement Bulbs Cost?

LED technology continues to evolve making bulbs and other fixtures increasingly affordable to replace. Most LED lamps can replace 40, 60, and 75-Watt incandescent bulbs. Just make sure to read the “Lighting Facts Label” to ensure that it’s the right brightness and color for where you plan to use the light.

In residential and multi-family housing LED lights can be used for more than just general overhead lighting this includes:

Under cabinet lighting in kitchens, bathrooms

LED lights continue to grow in versatility and affordability. They make a very sound investment for residential, commercial, municipal, and industrial applications. The initial return on your investment will quickly be realized by reduced energy consumption, as well as the long-term savings in replacement bulbs.

For additional information or to have a site survey, please contact us via this form, or call Brase Electrical Contracting Corporation at 402-331-0400